Rotat started doing obscure hand assembled tapes, mixing utmost vile perversion with demented humor. His early works was influenced by names like Taint and Smell & Quim. This Finnish ripping noise savage did only two releases before Freak Animal was convinced that he needs actual full CD release. Carnal Beauty was published on CD and well received among fanatics of fierce noise. Project gained attention outside Finland, publishing further tapes on labels like Narcolepsia and Obsessive Fundamental Realism. Return under banner of Freak Animal comes in from of ”Grease District” CD. Sound is developed further. Razor sharp distortions, painful feedback and industrial-noise, very crispy sound what offers good variation from seemingly live takes of noise blasts to multi-layered and more complex structures. Spirit offers something that could file also under most savage power electronics, yet it would be safe to say what we have here is traditional good harsh noise album!

KSNK is one of those names from Finland some people may have heard, but very few are lucky to own the tapes. Especially the latter tape, which is the main part of this CD. It was basically sold face to face in couple Finnish noise shows if someone knew to ask artists who might have them in his pocket.

KSNK approach is in some ways traditional to Finnish noise – yet also purely unique. Even if one may approach it on surface level, concluding it as yet another metal junk and feedback abuser, the way KSNK uses these elements, is unlike anyone else in Finland. Eccentric themes, combining vocals and obscure musical structures to minimalism of unprocessed sounds, field- or site recordings, eventually creates eerie and disturbing atmosphere. Short samples are obviously not doing justice for full CD. One has to go through painful moments of seemingly random moments of artists throwing junk at some outdoors location, to be blown up by heavy bolts of more constructed noise works.

To respect original hand made packaging of tape version, CD comes in jewelbox, but using ideas known from tape versions with torn slices of artwork.

Reissue of tape that was published by LSDO label. Recordings from 1999 and added bonus track.

Curious fact about this original tape is that unknown amount of edition of 100 was dubbed with wrong tracks. Artist had submitted master tape with b-side including promotional songs of upcoming materials. Some copies of tape – like the one that circulates online as digital file, has wrong tracks on it. Nobody knows how many tapes were dubbed incorrectly.

For many, this CD may be first time to hear release as it should have been! It includes cold, yet highly electric industrial soundscapes and heavy electronics, not far from Söldnergeist, Dagda Mor, and perhaps some works of Anenzephalia. Cold synth tones oscillating over subtle rhythms of crashing loops and sound samples, covered with processed voice samples and speeches. In English, “I despise death”, showcases well early progressions of Cloama. This release shows moment where transformation from harsh noise unit of earliest years was moving into recordings like “Neuroscan Organization” and split CD with GRUNT. Not to forget, these recordings are made around time when another Finnish legend, STROM.ec was formed. Due partly same members and gear, some similarities of the sound can be noticed!

Industrial Recollections idea was to reissue sold out items, most often tapes, that Freak Animal felt necessary to reissue, but didn’t want to make main label discography too fragmented. Many such an small and obscure releases, that they are unlikely to be released by almost anybody else. Unlike plenty of releases that have already existing cult status and following – and therefore potential market.

What exactly is “industrial” and what exactly constitutes “old enough” to warrant reissue, is very loose concept. Under Industrial Recollections label has happened reissues from 80’s and 90’s. Musically, anything vaguely rooted to traditions of industrial. From industrial noise to power electronics and experimental works.

Now, with Encephalophonic tape re-issues, IR takes quite a big leap forward. It has been question I have been pondering – why would one need to wait 20 or 30 years to validate necessity of reissue?

2010-2011 when these early Encephalophonic tapes were done, is yet to reach even 10 years anniversary. Yet being unavailable for long and debut tape being nearly impossible to get even when it came out, to me, it was very clear that I rather put out 8 year old great noise tape, than remain too fixed to idea to only dig the long gone history.

Encephalophonic as project is still very much active. It has progressed from early days, yet the core remains the same. What makes me consider Encephalophonic fit to industrial tradition is its content. Dark and abusive nature of recordings set it far away from heart warming jams and free-noise energy blasts. Of course, there is energy and ripping power, but it is razor sharp, cold and cruel and filled with destructive feel. Combined with negative feel of sound samples emerging between some tracks, band steps away from usual spirit known from Japanese harsh noise. While music nods towards masters of Japanese noise, Kazumoto Endo, Pain Jerk and such, Encephalophonic stays away from contemporary cut-up in means of technological methods. Lack of post-production and computer editing, keeps sound of physical and full of flesh and blood.

Double CD with booklet including reproductions of all original artworks of tapes and added sleaze.

Back in late 90’s and early 00’s, Freak Animal used to receive tapes from Russia. Now, decades later, via Russian contact person, I sent a word to Alexander asking whether Veprisuicida would be interested in some very needed re-issues. Great news was that there was no obstacles to launch decent sized re-issue project with some of the hardest to find Ultra tapes!

First to come on is Veprisuicida’s “Radio Stigmata”. It was issued in edition of mere 15 tapes, and never before published even as CDR.

Veprisuicida is the most primitive and noisy of Alexander Lebedev-Frontov works. His industrial projects are widely celebrated among underground, but Veprisuicida seems to be far less recognized. It’s charm is in brutal and manually crafted primitive industrial waste. Eerie feeling of old Soviet avantgarde clashes with industrial-noise tape manipulations. It is nearly impossible to find as rugged, as crude and as rusty industrial noise in genre these days. Bleak and rotten sound, with broken mechanical feel, were saturated tape manipulations and disruptive pause edits add further charm. It’s very far from bombastic effects and plastic sounding digital distortions and results of heavily layered on-screen editing. With its rawness, Veprisuicida may be *too much* for those looking more entertaining music. For lovers of fierce and difficult ripping industrial noise, we are proud to present these recordings finally as real CD, with original graphics.

GRUNT, BIZARRE UPROAR, DEATHKEY and CALIGULA031. Most material was recorded back in 2014. It took 3 more years that Deathangle Absolution Records finally released vinyl LP version. Small printrun LP has been nearly impossible to get. Hardly been available at any distributions and as usual these days, internet music dealing platforms blocked its sale early on, making also 2nd hand sales more challenging if someone actually was going to get rid of their copy.

Simple and short title is: Beyond. There is barely strict music and ideological uniformity with bands presented in compilation, but common element could be that each band goes *beyond* – in a way or another. It explains no further, no quick answers or slogans.

CD includes 12 pages booklet including 2 pages of graphics per artists in full color. 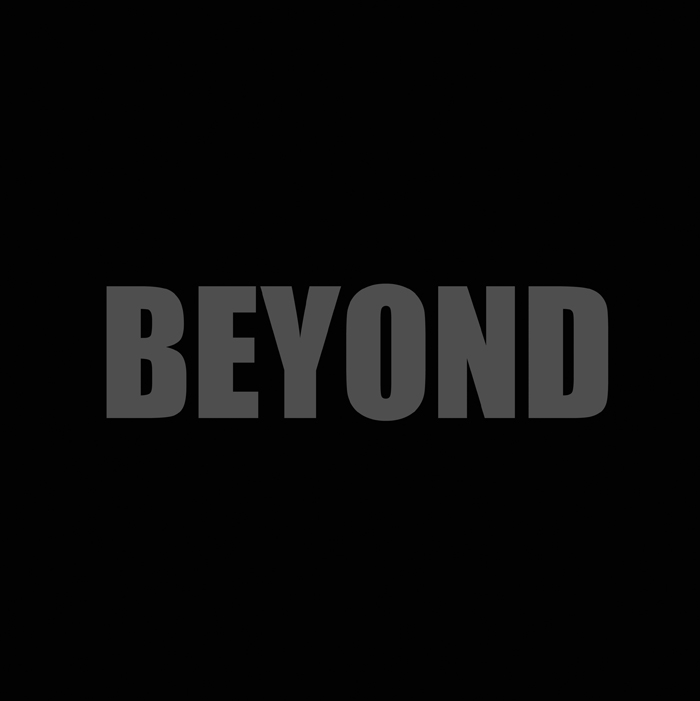 Wonderland Club C-30 tape, limited edition special package. The way it is made, make it rather impossible to “keep in stock” forever, unlike some of the simple IOPS tapes. Easily the best Wonderland Club material. From long ago received advance sketches of material, tracks eventually took new form when band re-visited already once finished recordings. Less one-dimensional noise, more composition over long sides of tape. Long lyrics observing the theme, screamed with high pitched yet sharply delivered vocals, not far from Final Solution. American Power Electronics. This tape is among “object tapes” on IOPS, where limited edition tapes have unusual packaging. Keep eye on future objects. 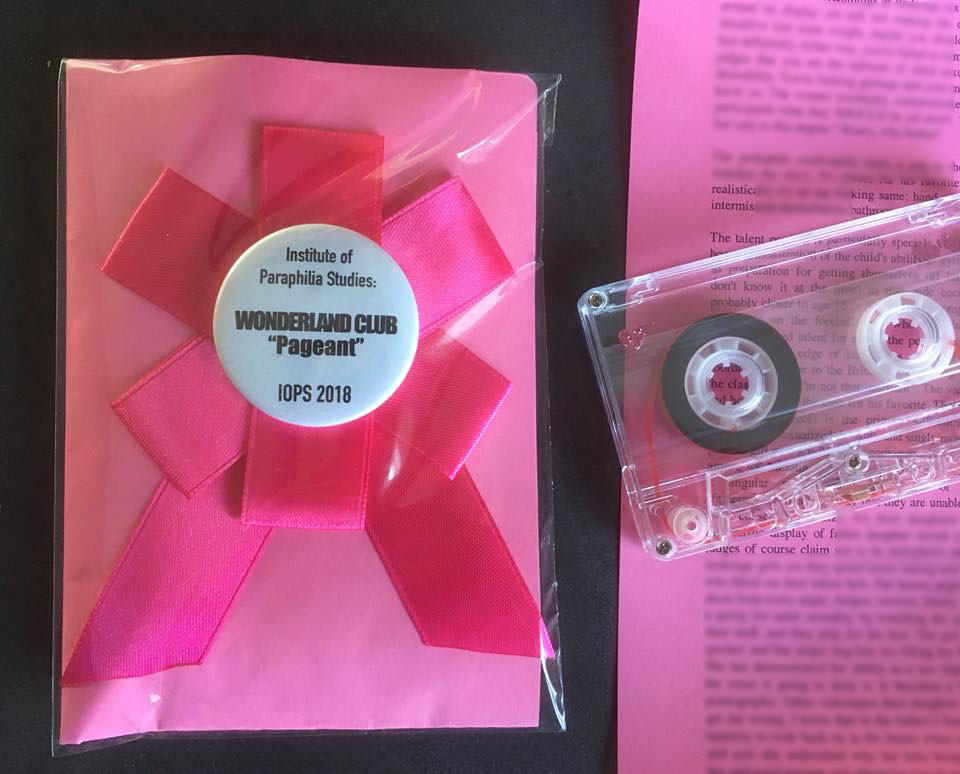 Retail orders should be made at: www.nhfastore.net